A few days ago, I was all set to post a blog about the process of rehearsing for our upcoming production of Two Rooms. Specifically, I wrote about the research that went into portraying the journalist character of Walker who is equal parts ally and antagonist to the main character of Lainie in the play. But then, earlier this week, a terror attack occurred in Brussels killing dozens and sending more shockwaves of fear throughout the Western world. And, given the subject matter, I felt like there was something more to be said about the process of doing this play amidst the the shadow of the real.

Broken windows at the national airport terminal following the Mar 22, 2016 bombings in Brussels, BE [Yorick Jansens/Pool/Reuters]

Two Rooms is a play about the invisible, yet unbreakable, bond between two lovers torn apart by terror. Written in 1988, and winner of Time Magazine’s Best Play of the Year, the script was a direct response to the (then) looming Iran hostage crisis. During that crisis, more than sixty American diplomats and citizens were held hostage for over 400 days between 1979 and 1981. It redefined US foreign policy in the Middle East with consequences that continue to the present day. Lauren, our director, has always said that the relationships in the play should take centre stage. That said, there is no denying the spectre of real world terrorism that hangs over the play. And, in the case of our company, it has been there since the beginning. 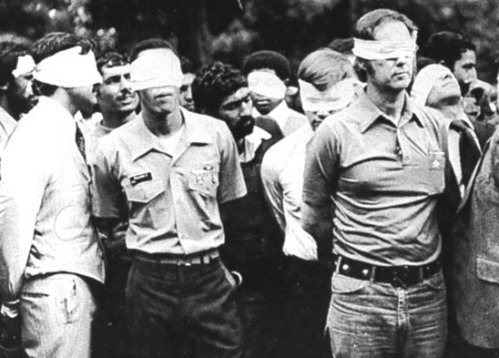 American hostage held at the height of the Iranian hostage crisis [Photo: Bettman/CORBIS]

We first decided to produce Blessing’s drama last October. At that point, there were a lot of discussions between Lauren, Aaron, and myself about the impact of doing a play about terror hostages in the age of ISIS. Having witnessed a multitude of images ranging from ISIS training clips to the infamous YouTube execution videos, we questioned whether to set the play in a more contemporary setting. Indeed, it was a topic of hot debate. Then, in late November, on the very night we confirmed our production venue came the news of the horrific attacks in Paris and Beirut which left scores of people dead. 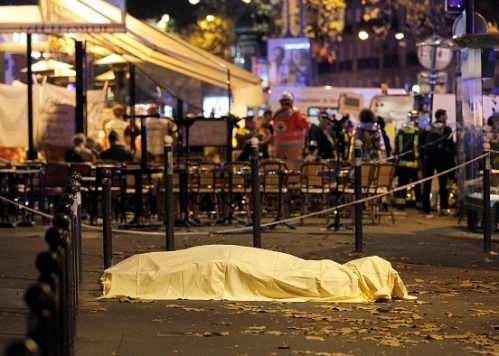 Once again, fear and anger filled the airwaves. News, talk show panels, and social media exploded about the threat of ISIS and a renewed War on Terror. All of sudden, the past of this play was violently pulled into our present. As we started rehearsals, it seemed more images of wounded people, broken buildings, and chanting terrorists were all over the place. As I tuned into the news every night, I also found I was becoming acutely aware of every incident. Car bombs in Turkey and Iraq. Suicide bombers in Syria. Shootings in Afghanistan. Some were widely reported. Others were mentioned as a side note. But the pictures always said a thousand awful words. I couldn’t help thinking of one of the lines that Walker says to Lainie: “It’s all imagery. That’s how people think these days. Images. Not ideas. Images.” 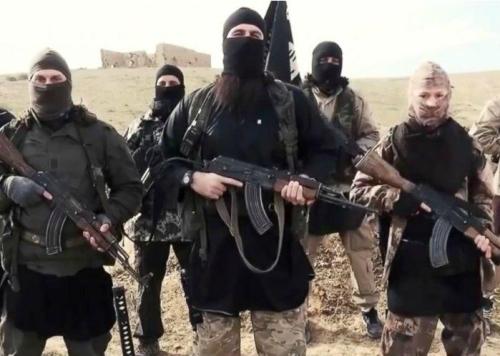 The process of rehearsing this play has been a very different experience for all of us at Same Boat Theatre. It’s not the first time we’ve taken on a subject based on current events. But it is the first time we’ve ever taken on a subject with such immediate and dramatic weight. Going into rehearsal, each of us has had a sense that this play is still so very timely. Sadly, all you need do is turn on the television. The images of blindfolded prisoners of ISIS look very similar to the blindfolded prisoners in Beirut thirty years ago. This proximity to the real has made us all work more diligently and more honestly during the whole process. 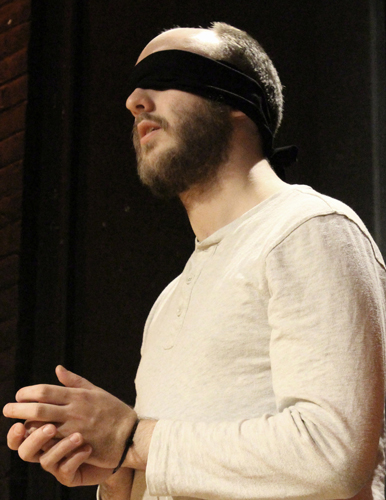 Beyond the sense that this play has been ‘ripped from the headlines’ is the fact that people like Michael and Lainie exist in this world. Ordinary people have and sadly will continue to be victims of terror. But this play has forced us all to look at the complex issues surrounding terrorism a lot more closely with an eye towards understanding. And if our production of Two Rooms serves to do the same with even one member of our audiences then we will have done right by the playwright and his powerful script.