“A sophisticated, stylish affair, both smart and funny… an insightful look at the way relationships begin, bloom and sometimes end.” 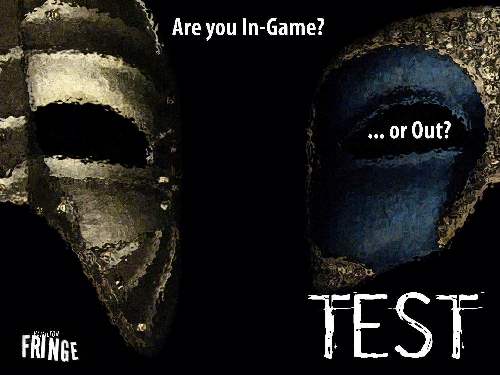 A one-act drama about love, lies and Live Action Role Play, Test tells the story of two LARP gamers who stage a retelling of their past to learn the truth of their relationship in-game and out-of-character. But as the rules change the story of Dana and Drew becomes an ever challenging quest to be won at all costs. Performed at the Hamilton Fringe Festival (July, 2013)

Hamilton Spectator REVIEW: “You don’t have to know, or care, about geek culture to become involved with these likable characters. You’ll just surrender to who they are. Near’s play is a sophisticated, stylish affair, both smart and funny… an insightful look at the way relationships begin, bloom and sometimes end. Near and Weber act the play with a sweet undertow of vulnerability.”

“Hamilton Fringe 2013 Reviews” by Patricia Bradbury; The View, July 25 – 31, 2013. Check out the feature review The View about our production of Test.

The View REVIEW: “A wonderful show directed by Aaron Joel Craig. Stephen Near and Sara Weber act with energy and aplomb. Writer Stephen Near has strategic fun moving the characters through their gaming personas: sorcerers privy to exotic language, grand gestures and fantasy love.”