On October 19, 2015, Canadians will go to the polls for what has been the longest and perhaps most bitterly fought elections in recent history. However the votes are counted, and whichever party(s) form  majority or minority government, the stakes in this election have been incredibly high. As I write these words today, we’ve seen the end of the last of the publicly broadcasted debates and already the polls and pundits are telling us who they thought were the winners and the losers and where they think the political wind will blow on the 19th. But, frankly, their guess is as good as mine at this point. 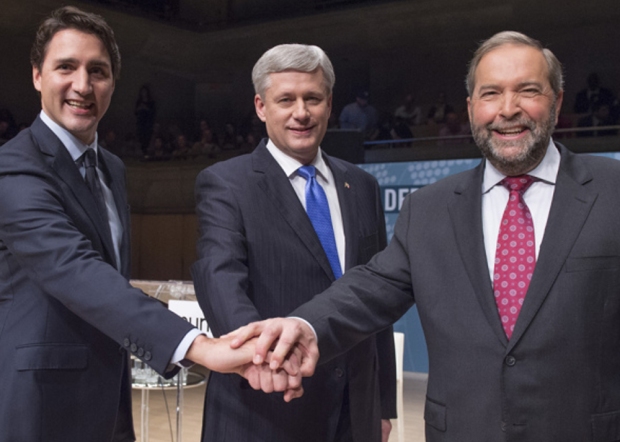 “All for one and one for all!” Yeah… right. [Photo: The Canadian Press/Nathan Denette]

It occurred to me that come the 19th, it will have been just over 3 months to the day that Same Boat Theatre premiered our hot button, political play Finding Mr. Right at the Hamilton Fringe Festival. At the time of our July 17 opening, and during our 7 show run, the whole company was anticipating the reaction to our play. Directly inspired by the Mike Duffy/Nigel Wright Senate scandal, and informed by the politics of the Harper government, we weren’t sure how appealing it would be to Fringe audiences. Indeed, a local paper ran a preview of the Festival wherein our play was oddly described as “a commentary on the conservative right and the dating scene”. So, yeah, we didn’t know what to expect. We did know that we’d produced a play on an issue that mattered to us and we knew it was important for people to see it if only to start a conversation. 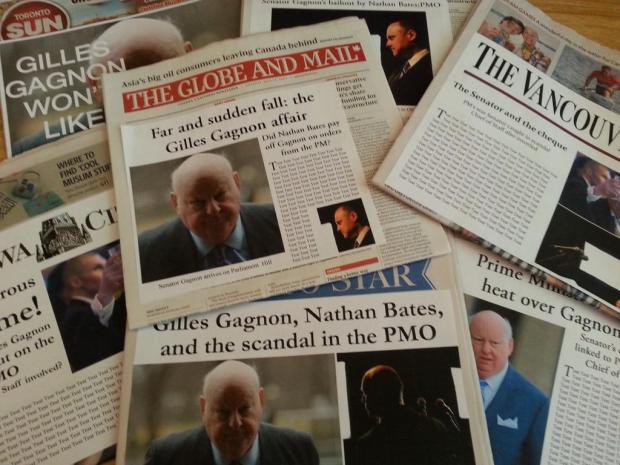 Truth and fiction in the prop newspapers of “Finding Mr. Right”.

It’s safe to say that Finding Mr. Right did just that. We found our audience and were a critical hit with the public and reviewers alike. But even more satisfying was the political reaction to the play. Without fail, after every show, Lauren and I would take our bows and then I would remind audiences of the imminent election coming in October and how it was important that they were registered to vote. And without fail, after every show, many audience members would stay in the theatre or outside the doors and thank us for finally speaking out on this important issue or tell us the show had inspired them to look into Canadian politics with more care and scrutiny. A young, local artist even remarked that the show “inspired me to vote this year… I am going to put my voice out there.” For all of us in the company, that sort of thing was the highest complement we could hear and made our Fringe experience truly gratifying. 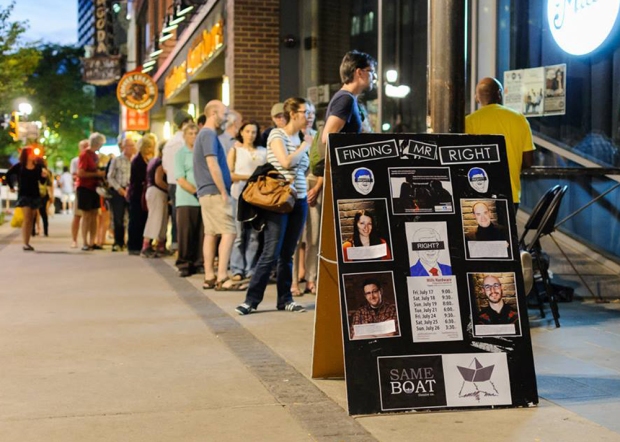 Fringe line-up outside Mills Hardware… which I never got to see firsthand. [Photo: Hamilton Fringe Festival]

The writ was supposed to have been dropped in September. So imagine my surprise when, not even a week after our show closed, the election was called. Two weeks after that came the Duffy trial in which former PMO Chief Nigel Wright (the inspiration for Nathan) finally took the stand to reveal more details about his involvement in the plot by Party insiders to deal with the scandal. And then, in early Sept, Conservative strategist Jenni Byrne (the inspiration for Shelly) was sidelined from the election following perceived candidate missteps and a mishandling of the Syrian refugee crisis on the campaign trail. Indeed, the way this election campaign has played out has had me constantly thinking “second act to Mr Right” in my head. Art imitates life but sometimes truth is stranger than fiction… especially in the political realm. 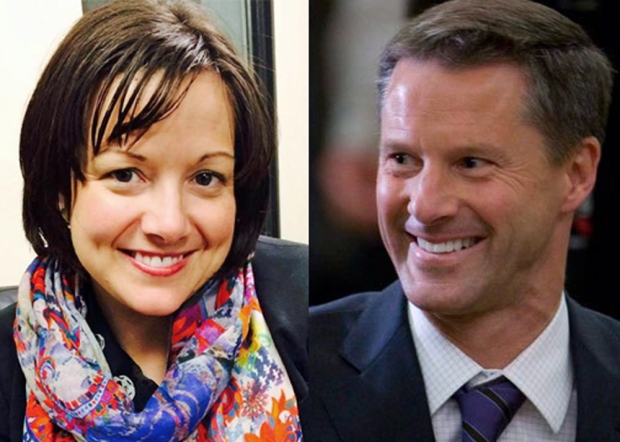 Which takes us to where we are right now. Less than two weeks to go until Canadians go to the polls in one of the tightest races we’ve ever seen. I won’t muse on an outcome here because a lot can happen in two weeks. All I will say is that performing Finding Mr. Right on the eve of this election has reinforced my belief that theatre is at it’s most powerful when it is political. And by that I mean relevant. I mean radical. When theatre stakes a claim or makes a stand on matters directly affecting us as citizens it is, in my opinion, the most potent of art forms. It is capable of moving people to think critically and then pushing them to act. In this way, it is itself a political act that challenges us and the society in which we live. And well it should. Right now, political theatre is needed more than ever before because it has more power than ever before. Power to create. Power to communicate. And power to change.  And the stakes, as I said, are incredibly high. 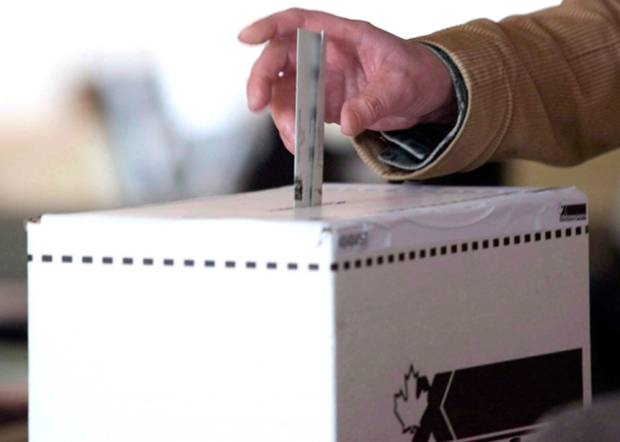 Make sure you are registered to cast your vote on October 19th! [Photo: The Canadian Press]

So, in closing, I think it’s only appropriate I repeat what I said at the end of every performance of our show because, quite frankly, you can never say this enough right now:

Same Boat Theatre believes that this year’s federal election on October 19 is more important than ever before. But the rules have changed. In 2014, the Conservative government passed Bill C-23, the Fair Elections Act, which changed some of the laws around voting. As well, the redrawing of Canada’s electoral boundaries with the addition of 30 new ridings across the country means the election map has changed for 2015. Voter turnout in the 2011 was 61.4%… the third lowest in Canadian history. We can’t let this happen again. Find out how you can cast your vote this October. Go to ELECTIONS CANADA for more information!

Ladies and gentlemen, do not let your voice go unheard!